One of the most popular festivals in early November is the Loy Krathong Festival. It tales place at a time when the weather is fine as the rainy season is over and there is a high water lever all over the country.

" Loy " means " to float" and a " Krathong" is a lotus-shaped vessel made of banana leaves. The Krathong usually contains a candle, three joss-sticks, some flowers and coins.

In fact, the festival is of Brahmin origin in which people offer thanks to the Goddess of the water. Thus, by moonlight, people light the candles and joss-sticks, make a wish and launch their Krathongs on canals, rivers or even small ponds. It is believed that the Krathongs carry away sins and bad luck, and the wishes that have been made for the new year due to start. Indeed, it is the time to be joyful and happy as the sufferings are floated away.

The festival starts in the evening when there is a full moon in the sky People of all walks of life carry their Krathongs to the nearby rivers. After lighting candles and joss-sticks and making a wish, they gently place the Krathongs on the water and let them drift away till they go out of sight.

A Beauty Queen Contest is a important part of the festival and for this occasion it is called " The Noppamas Queen Contest" . Noppamas is a legendary figure from the Sukhothai period. Old documents refer to her as the chief royal consort of a Sukhothai King named "Lithai". Nuppamas was said to have made the first decorated Krathong to float in the river on the occasion.

In Bangkok, major establishments such as leading hotels and amusement parks organise their Loy Krathong Festival and the Krathong contest as mafor annual function.

can not say it my lesson ... I think this site gave you all information you need already.

ram wong ÃƒÃ“Ã‡Â§ = n. vi. a folk dance somewhat like ballroom dancing now revived (everyone know how to dance like that... and farrang in law alway have to show their step RAM WONG) 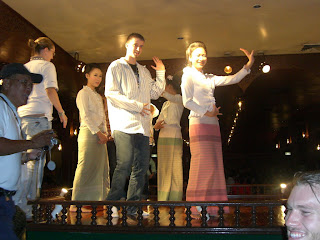